Hemorrhoids are classified as external or internal, and can be staged or graded 1 to 4. Click on the Classification of Hemorrhoids page and or watch the Hemorrhoid Surgery Video [3:00] to see and hear the differences in the Goligher hemorrhoid classification system, and to learn the basics of Hemorrhoid surgery. 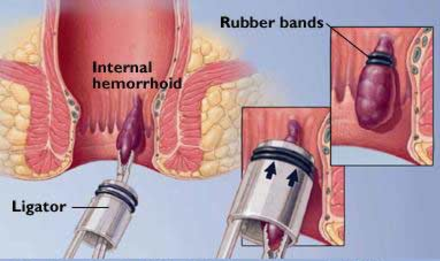 Infrared Coagulation: A CO2 laser's invisible infrared light can be used to effect heat-driven coagulation to a specific spot on tissue. By spot welding hemorrhoidal tissue into place, Laser welded hyper-attachments can prevent the hemorrhoids from sagging downward and protruding outside the rectum. A specialized instrument called an Infra-Red Coagulator (IRC), is also used for this purpose. IRC Educational Animation [9:15]   IRC Medical 3-D Animation [28]

Rubber band Ligation: A grasping forceps is used to pull an internal hemorrhoid into a small one-inch tube. A rubber band is pushed off the top of the tube onto the hemorrhoid, gripping and strangulating the base of the hemorrhoid, choking off its blood supply. As a result, the hemorrhoid shrivels up and dies, and falls off during a normal bowel movement in about ten days. Rubber Band Hemorrhoid Ligation Animation [0:30]

​Anoscopy and the CRH O’Regan System: A disposable anoscope and suction band ligator is used to pull/suck the hemorrhoid into a syringe where it is captured. Then a band is deployed around the base of the hemorrhoid choking off its blood supply (a variation of the ligation procedure, above). Diagnostic anoscopy and the CRH O’Regan procedure animation [4:15]​

Sclerotherapy: A sclerosing agent, typically 5% phenol in oil, is injected into an internal hemorrhoid. The substance injected leads to an inflammatory response, the blood flow into the hemorrhoid is partially blocked, secondary fibrosis is facilitated, shrinking and hardening the hemorrhoid. Animation illustrating where the sclerosant is injected [0:25]. Live video showing a hemorrhoid being sclerosed [0:12].

​Henorrhoidolysis: Utilizing a specialized device (e.g., Ultroid®) a low voltage negative galvanic current is applied to an internal hemorrhoid pierced by a needle-tipped electrode. A chemical reaction occurs around the electrode, a white foam appears (hydrogen gas) and the electrode tip becomes loose due to the liquefying action of sodium hydroxide on the proteins around the electrode. The partially liquified part of the hemorrhoid is then reabsorbed into the body's lymphactic system. Ultroid® Physician Training Video [5:04]. For more information about how electric modalities are used in the treatment of hemorrhoids, view the Electric Treatment Of Hemorrhoids.pdf

Hemorrhoidal Arterial Ligation (H.A.L.) and Transanal Hemorrhoidal Dearterialization (THD) is performed using a modified proctoscope in conjunction with a Doppler ultrasound flowmeter for identification of each hemorrhoid's arterial blood supply, which is subsequently ligated. A needle and thread is passed beneath the artery, and a knot is externally tied, to stop the blood flow to the hemorrhoid. Because less tissue is excised, there is less pain experienced than with traditional hemorrhoid surgery. H.A.L. animation video [2:22]. For more information about HAL and RAR for the treatment of prolapse and hemorrhoids, view the HAL-RAR.pdf

IMPORTANT: Know What to Ask Your Surgeon.pdf, and and Know About the Complications of Hemorrhoid Surgery.pdf. 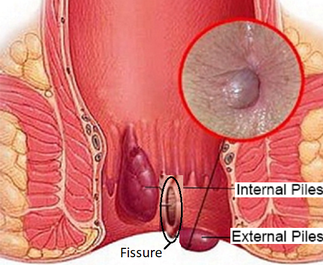